Wow, it’s been a little while! There have been lots of developments on the science side of things, but I wanted to take a step back and talk about some cool creatures that I’ve had the pleasure to encounter. The rainforest isn’t just Manakins and bullet ants, you know!

One of the coolest things I’ve come across so far was a beautiful puma (mountain lion, Puma concolor) chilling out near the trail. My friend and fellow researcher at La Selva, Diego, was the one who first spotted it and took this picture: 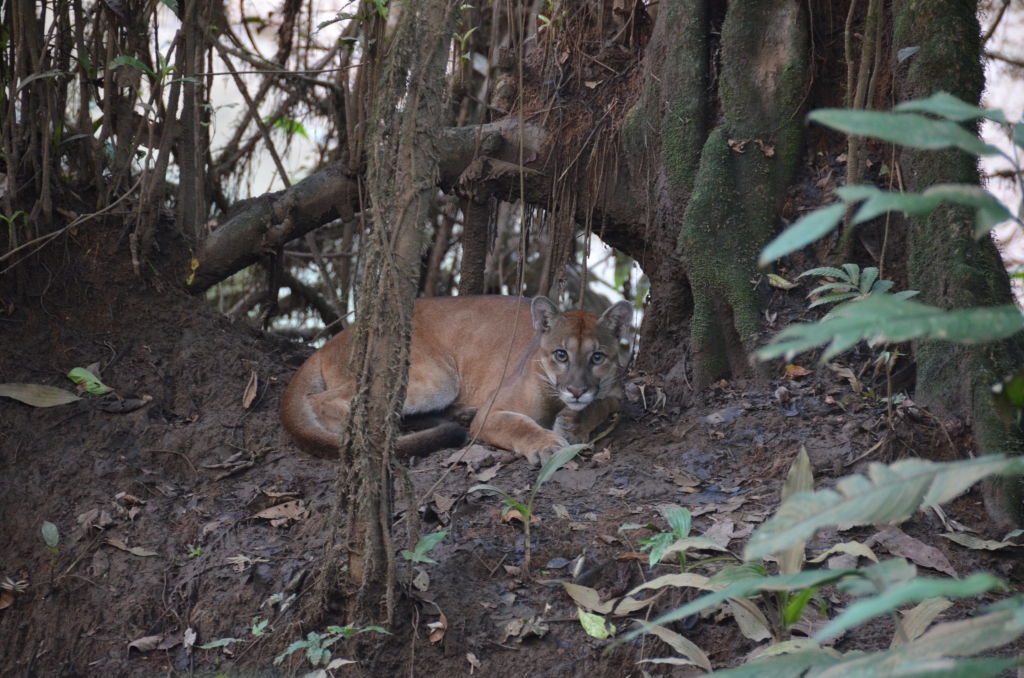 For me, it was definitely the ideal scenario for meeting a mountain lion- the cat was sleeping on the opposite side of a small ravine, so we could admire it without too much concern about getting pounced on.

Although, it was less ideal in other ways: it was looking pretty sleepy, probably having just stuffed itself full of peccaries, but it definitely perked up when it saw Diego’s 18-month-old son, Andrés. This puma also had chosen to nap in a spot only 175m down the trail from the station, pretty close to home!

I walk by there several times a day and I haven’t seen it since. Although it was a little disconcerting to know it was hanging out really nearby, it felt a lot better when I knew exactly where it was…

These large cats are generally very hard to see in the wild, especially in Central and Latin America where many forests are degraded by hunting (not only of the predators themselves but of potential prey species). It is a real credit to the diligence of the conservation efforts of the Organization for Tropical Studies and the Costa Rican government in nearby Braulio Carrillo National Park. The back of the La Selva reserve actually forms a continuous corridor with Braulio Carrillo which is likely responsible for the potential puma, jaguar, and tapir sightings here. The strong history of protected forest in this area is also the reason why one can easily see many other awesome animals (in particular, birds) that would otherwise be either absent or extremely wary of humans due to hunting, including Great Tinamou (Tinamus major), Little Tinamou (Crypturellus soui), Great Curassow (Crax rubra), and Crested Guan (Penelope purpurascens).

The puma was near enough, but there is a lot of stuff even closer to home. The staff at the research station does an incredible job keeping the place immaculate, but there is only so much you can do to keep the forest from creeping in.

Starting about a week ago, I began finding rather large droppings in the middle of my floor. I offhandedly mentioned to someone that I thought I had rats in my room, and she said, “oh no, that’s the geckos.”

Sure, I knew I had geckos in my room- pale-colored little guys about three inches long that make chirping sounds at night. I like them because they’re cute, and they eat all the little bugs. But there was no way they were producing the sizeable mystery-poops.

“Ha, you’ve never seen the BIG ones,” said my friend.

Sure enough, I soon found this dude stuck to the wall: 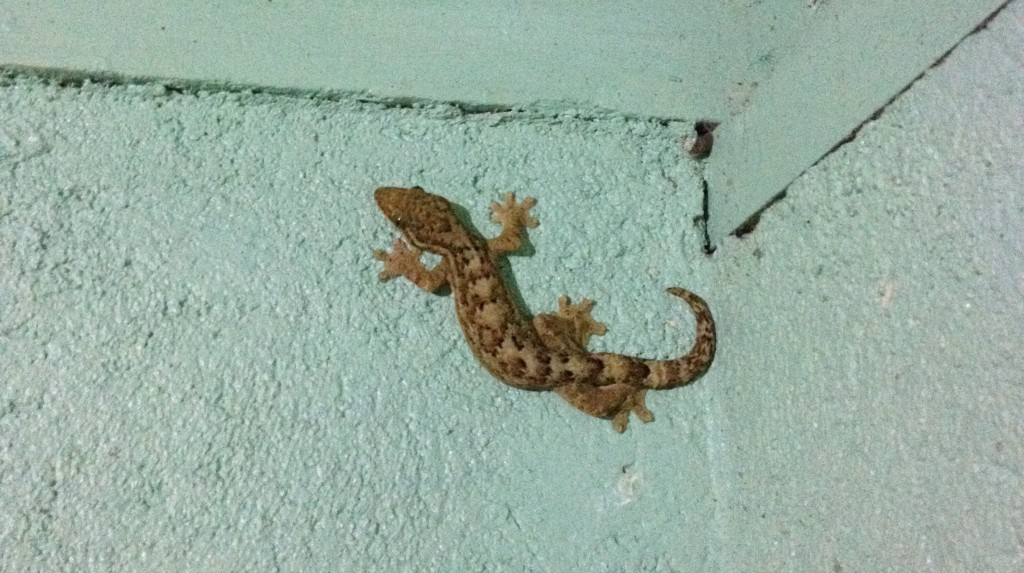 Another organism I find myself sharing my space with is much larger than any big gecko or puma: a colony of leaf-cutter ants! While the ants themselves are quite small, the colonies are humongous, on the order of millions of ants. I am lucky enough to have a column of them constantly streaming by my front door, and the tree near my cabin is unlucky enough to be the target of their efforts. They are perhaps the most important herbivores in the forest, harvesting huge amounts of leaf biomass to feed to fungus colonies they cultivate in their nests. In a fascinating example of natural agriculture, the ants then subsist on the fungus they grow. There are many, many colonies in the forest, making leaf-cutter ants nearly ubiquitous here. They are responsible for transferring large amounts of nutrients and resources like carbon contained in the leaves underground to be decomposed. Exactly what the effect of the tiny leaf-cutter ants is on the ecosystem is the subject of active research (specifically, my friend Diego’s research!), but it is certain to be on a grand scale.

While there are a bunch of neat animals making themselves at home in and around my home, the neotropical rainforest is full of creatures that are happy to make own their homes. One of my favorite animals I have seen so far are White Tent Bats (Ectophylla alba), a near-threatened species of bat that is one of only two species in the world known to have white fur. These tiny guys construct roosts in large heliconia leaves by biting down the edge of the central rib causing the leaf to fold down forming a “tent.” My friend Cleo found these two puff-balls huddled under a leaf on a rainy day last week: 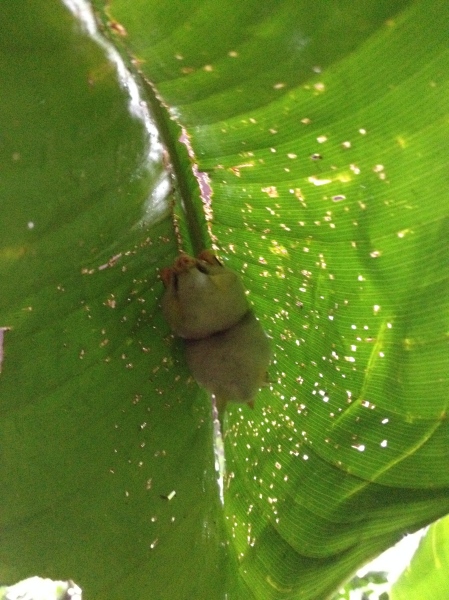 Finally, check out this strange creature: if anyone has some info on this, comment on this post, I would really appreciate it!

That’s all for now- more science and my full Costa Rica birding list coming in a couple days!